The bioenergy potentials in MESSAGE V.4 have been derived the IMAGE 2.4 model (van Vuuren et al., 2009; van Vuuren et al., 2010), using strict sustainability criteria (cf. Riahi et al. 2012, Appendix C, 17.2.3). In the literature, a very wide range of estimates of the biophysical potentials can be found. These are partly related to the controversies that are related to bioenergy but also to a wide range of underlying assumptions. The list below summarizes the important factors:

Figure 1 summarizes the bioenergy potentials and corresponding ranges in the IMAGE model for different assumptions for above factors. If yields develop along a median path, the potential is around 160 EJ per year using all abandoned agricultural land and half the natural grassland. Strict sustainability criteria (limited use of natural areas; expansion of bio reserves and excluding areas with severe water scarcity or soil degradation) lead to a potential below 100 EJ in 2050, and possibly considerably lower. It should be noted that in 2100, the bioenergy potential is considerably higher through further expected improvements in yields and decline in global population. As a result, the potential could be in a 200-400 EJ range, but strict sustainability criteria could again limit potential to below 200 EJ in 2100. In the sequel, we will discuss the implications of each of the factors on the bioenergy potentials in more detail. 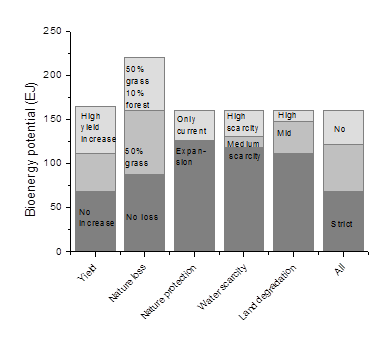 A critical factor for future bioenergy use is the development of land use as a whole. Future land use is determined by an interplay of complex factors such as food demand, trade and changes in agricultural production methods. At the moment, the world uses about 1.5 Gha of cropland and 3.3 Gha of pasture land (for comparison the total land area is about 14 Gha) (Figure 2). Over the past few decades, the global agricultural area has been slowly expanding (by about 5% in the 1970-2005 period) as a function of an increasing demand for agricultural products on the one hand and increasing yields on the other hand (FAO, 2008). The expansion of land is much slower than production increase over the same period as much of this increase has been achieved through intensification (about 80%) rather than by expansion of agricultural area (about 20%).

For the future, the demand for food production is projected to increase further driven by population growth and dietary changes. As a whole, the increase in production is expected to be slower than in the past as a result of a slowdown in population growth, although diets are projected to become more meat intensive (van Vuuren et al., 2008; Smith et al., 2010). This trend is relevant for future land use, since production of animal products requires much more (indirect) land than crops. For instance, the production of beef protein requires several times the amount of land than the production of vegetable proteins (Stehfest et al., 2009).

Most of the scenarios found in the literature indicate that production increase will again be mostly met via yield increases (van Vuuren et al., 2008; Smith et al., 2010). The contribution of expansion of harvested land to increase production ranges from as low as 5% to around 45%. In general scenarios with more detail on the agricultural system tend to be on the lower side of this range. Behind the trends at the global levels, often a considerable expansion of arable land is projected in developing countries (especially Africa and Latin America), but this is partly compensated for by a decrease of harvested area in temperate zones. The total land increase is certainly still within the scope of total land available for agricultural production (Fischer et al., 2009).

Figure 2. Land use under different scenarios (left panel: pasture land, middle panel crop land) and the potential for bioenergy in 2050 (right panel) as a function of the land use scenario (not accounting for additional sustainability criteria). Note: OECD EO indicates the OECED Environmental Outlook scenario.

The potential for bioenergy is directly related to these developments. In scenarios with lower demand for land for food production, there will be more scope for bioenergy production without implications for food security.

Yield assumptions are important both with respect to the agricultural system as a whole as specifically for bioenergy production. The first play a key role in future land use trends already discussed in the previous section. Historically, on average the increase in crop yields has been around 1% per year. Higher yield increase would lead to less land demand for food production. Lower yield increase leads to the opposite situation. Some studies emphasize that yield increases might be slower in the future than in the past as a result of reaching productivity ceilings (Bringezu et al., 2009)– but other studies more-or-less assume a continuation of current trends.

Assumptions with respect to land use planning

Another reason for controversy is related different views on the ability to manage land use. Researchers focusing on biophysical potentials tend to emphasize that theoretically it is possible to produce bioenergy on abandoned agricultural land or natural grasslands, excluding land use for production and important areas for biodiversity (Smeets et al., 2007; Dornburg et al., 2008; van Vuuren et al., 2009). Other researchers, however, indicate that it is very difficult to implement policies that produce bioenergy only on these “ideal” areas – and that in reality bioenergy will always compete for food production, either because it produced from the same crop, or because they compete for the best agricultural area (Eickhout et al., 2008; Searchinger et al., 2008). As a result, agro-economic studies that directly model the competition of food and bioenergy crops tend to find clearly noticeable impacts of bioenergy production on the prices of food crops.

There are large differences in terms of the energy-efficiency, greenhouse gas emissions and land-use efficiency of various bioenergy routes. Often, a distinction is made between so-called first generation (food crops) and second generation (cellulosic) bioenergy routes. However, it should be noted that also within these groups large differences exists. The use of maize to produce ethanol does require a similar amount of energy input as produced in the form of ethanol, while also the emissions tend to be higher than those of fossil-fuel based alternatives. In contrast, the production of ethanol from sugar cane leads to much better results. The expected performance of second generation bioenergy is considerably better. Studies suggest a higher energy-output per unit of land, low direct emissions per unit of energy and also the possibility of producing bioenergy on other lands than those suitable for food crops.

The discussion on land degradation is more complex. On the one hand, bioenergy potential in severely degraded areas should probably not be accounted for given the impacts on yields. However, bioenergy optimists argue that areas with medium degradation might actually be very suitable for bioenergy production as perennial bioenergy crops might have a distinct comparative advantage over food crops in these areas based on the physiology of the crops. Growing bioenergy in these areas might lead to only very limited impacts on food production.

The availability of agricultural residues for bioenergy production has been estimated to range from hardly any available material to over 100 EJ per year. Berndes et al. (2003) reviewed a wide range of studies, including studies on bioenergy (including residues) potentials and bioenergy use. They found that a typical range for residue use/availability in 2020-2030 might be 20-80 EJ per year  (average 50 EJ per year ), for 2050 it is 30-100 EJ (average 65 EJ), and for 2100 it is 30-150 EJ (average around 80-100 EJ). Much lower estimates have also been published, such as Nonhebel (2007), who states that of the 12 EJ per year of agricultural residues, most residues cannot be regarded as available, since it is used as livestock feed.

In 2050, most combinations of factors result in a bioenergy potential below 200 EJ. Only rather optimistic assumptions would result in a bioenergy potential above 400 EJ, all having a substantial impact on biodiversity. If yields develop along a median path, the potential is around 200 EJ per year using all abandoned agricultural land and half the natural grassland. Strict sustainability criteria (limited use of natural areas; expansion of bio reserves and excluding areas with severe water scarcity or soil degradation) lead to a potential below 100 EJ in 2050, and possibly considerably lower. It should be noted that in 2100, the bioenergy potential is considerably larger than in 2050, through improvements in yields and the expected slow down in population growth. As a result, the potential could easily be in a 200-400 EJ range. Strict sustainability criteria however, are likely to limit bioenergy potential below 200 EJ in 2100.

Given the direct relationship between bioenergy use, land use, food supply and biodiversity it seems very important in each case to closely monitor impacts of different energy and climate policies. Similarly, policies that would include direct or indirect (renewable) bioenergy targets need to be evaluated on a regular basis. This implies that the potential mentioned above clearly depend on land use planning and sustainability criteria. It should be noted that a rise in fossil fuel prices (as a result of depletion) may make bioenergy competitive anyway. In such a situation, clear policies with respect to criteria and land use planning will be very important to prevent increasing food prices and irreversible biodiversity loss.

The resulting bioenergy supply curves from IMAGE are ultimately divided into sextiles and implemented as discrete supply curve steps into MESSAGE.