Table 3.1 shows the assumed total quantities of fossil fuel resources in the MESSAGE model for the base year 2005. Figure 3.1 gives these resource estimates as supply curves. In addition, the assumptions are compared with estimates from the Global Energy Assessment (Rogner et al. 2012) as of the year 2009. Estimating fossil fuel reserves is built on both economic and technological assumptions. With an improvement in technology or a change in purchasing power, the amount that may be considered a “reserve” vs. a “resource” (generically referred to here as resources) can actually vary quite widely.

Conventional oil and gas are distributed unevenly throughout the world, with only a few regions dominating the reserves. Nearly half of the reserves of conventional oil is found in Middle East and North Africa, and close to 40% of conventional gas is found in the Former Soviet Union. Coal shows much more geographical diversity: the Former Soviet Union, Pacific OECD, North America, and Centrally Planned Asia and China all possess more than 10 ZJ of reserves. 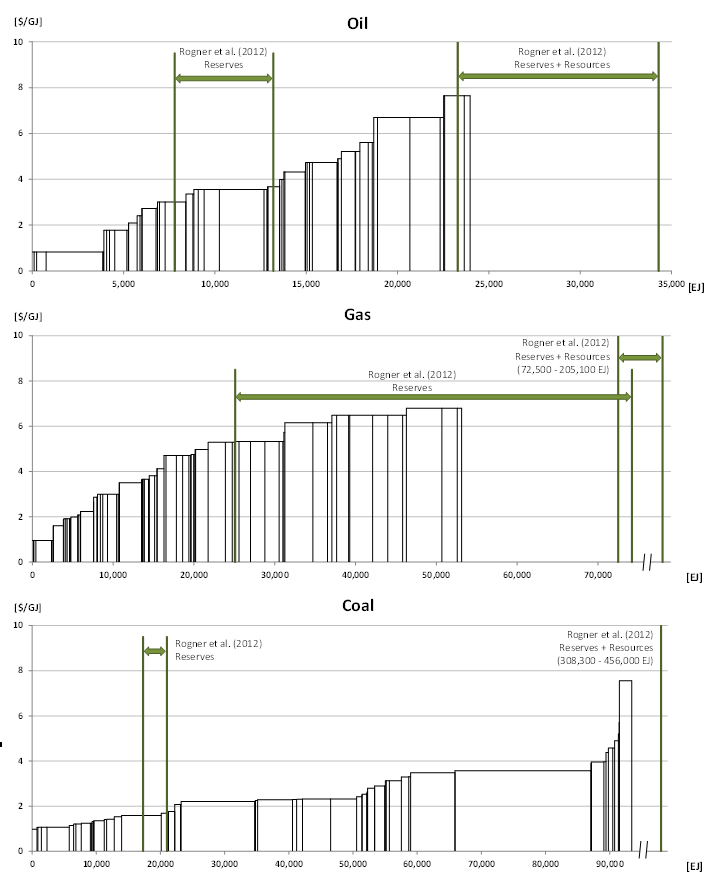 Estimates of available uranium resources in the literature vary considerably, which could become relevant if advanced nuclear fuel cycles (e.g., the plutonium cycle including fast breeder reactors, the thorium cycle) are not available. In MESSAGE advanced nuclear cycles such as the plutonium cycle and nuclear fuel reprocessing are in principle represented, but their availability varies following the scenario narrative. Figure 3.2 below shows the levels of uranium resources assumed available in recent MESSAGE scenarios, building upon the Global Energy Assessment scenarios. These span a considerable range of the estimates in the literature, but at the same time none of them fall at the extreme ends of the spectrum (see Rogner et al. (2012), Section 7.5.2 for a more detailed discussion of uranium resources). Nuclear resources and fuel cycle (if available) are modeled at the global level, which is compatible with the notion of the nuclear fuel cycle being under international control. 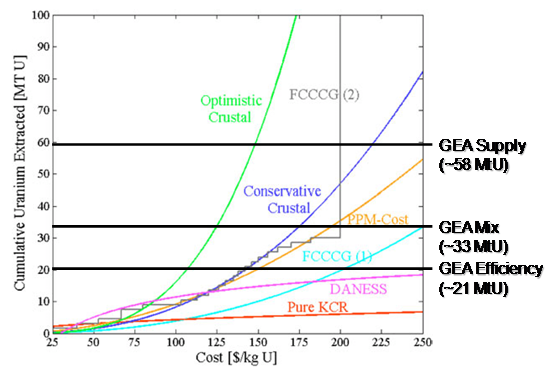 Figure 3.2. Global uranium resources in the MESSAGE interpretation of the 3 GEA pathway groups compared to ranges in the literature (Schneider and Sailor, 2008).

Table 3.2 shows the assumed total potentials of renewable energy deployment (by resource type) in the MESSAGE model by 2050. Figure 3.3 overlays these estimates on a map of the 11 MESSAGE regions. In addition, the assumptions are compared with technical potential estimates from the Global Energy Assessment (Rogner et al. 2012).  In this context, it is important to note that typical MESSAGE scenarios do not consider the full technical potential of renewable energy resources, but rather only a subset of those potentials, owing to additional constraints (e.g., sustainability criteria, technology diffusion and systems integration issues, and other economic considerations) that may not be fully captured within the model. These constraints may lead to a significant reduction of the technical potential.

Notes: MESSAGE renewable energy potentials are based on Hoogwijk (2004), Hoogwijk and Graus (2008), Christiansson (1995), Tubiello and Fischer (2007), van Vuuren et al. (2009), and Rogner et al. (2012). The potentials for non-combustible renewable energy sources are specified in terms of the electricity or heat that can be produced by specific technologies (i.e., from a secondary energy perspective). By contrast, the technical potentials from Rogner et al. (2012) refer to the flows of energy that could become available as inputs for technology conversion. So for example, the technical potential for wind is given as the kinetic energy available for wind power generation, whereas the deployment potential would only be the electricity that could be generated by the wind turbines.

While potentials for renewable energy can differ quite substantially between different regions, they are more equitably distributed across the globe than fossil fuels. On the other hand, renewable energy sources cannot be traded as easily before conversion to the secondary level, e.g., trade would typically occur after conversion to electricity or some processed solid, liquid or gaseous fuel. Figure 3.3 shows the renewable energy resource potentials for the 11 MESSAGE regions by 2050. The figure indicates the strong dominance of solar energy across almost all regions. An exception is bioenergy in tropical regions, and wind energy in North America and the Former Soviet Union countries, and to some extent in Europe. However, at a first glance it becomes clear that regionally some of the resources are scarce and the potentials could be exhausted relatively quickly, in particular in those regions with high population densities, which could lead to land use limitations for some of the renewable energy sources. This is particularly the case in Asia, most notably in South Asia, but also in Pacific Asia and partly in China).

﻿Figure 3.3.  Renewable energy deployment potentials by region in 2050, as assumed in the MESSAGE model.