For all solid (coal, biomass) and liquid energy carriers (oil products, biofuels, fossil synfuels) a simpler approach is taken and only transmission and distribution losses and costs are taken into account.

Inter-regional energy transmission infrastructure, such as natural gas pipelines and high voltage electricity grids, are also represented between geographically adjacent regions. Solid and liquid fuel trade is, similar to the transmission and distribution within regions, modeled by taking into account distribution losses and costs. A special case are gases that can be traded in liquified form, i.e. liquified natural gas (LNG) and liquid hydrogen, where liquefaction and re-gasification infrastructure is represented in addition to the actual transport process.

The MESSAGE framework includes a single annual time period characterized by average annual load and 11 geographic regions that span the globe. Seasonal and diurnal load curves and spatial issues such as transmission constraints or renewable resource heterogeneity are treated in a stylized way in the model. The reliability extension described below elevates the stylization of temporal resolution by introducing two concepts, peak reserve capacity and general-timescale flexibility, to the model (Sullivan et al., 2013). To represent capacity reserves in MESSAGE, we defined a requirement that each region build sufficient firm generating capacity to maintain reliability through reasonable load and contingency events. As a proxy for complex system reliability metrics, we chose to use a reserve margin-based metric, setting the capacity requirement at a multiple of average load, based on electric-system parameters. While many of the same issues apply to both electricity from wind and solar energy, the description below focuses on wind.

Toward meeting the firm capacity requirement, conventional generating technologies contribute their nameplate generation capacity while variable renewables contribute a capacity value that declines as the market share of the technology increases. This reflects the fact that wind and solar generators do not always generate when needed, and that their output is generally self-correlated. In order to adjust wind capacity values for different levels of penetration, it was necessary to introduce a stepwise-linear supply curve for wind power (shown in the figure below). Each bin covers a range of wind penetration levels as fraction of load and has discrete coefficients for the two constraints. The bins are predefined, and therefore are not able to allow, for example, resource diversification to increase capacity value at a given level of wind penetration. 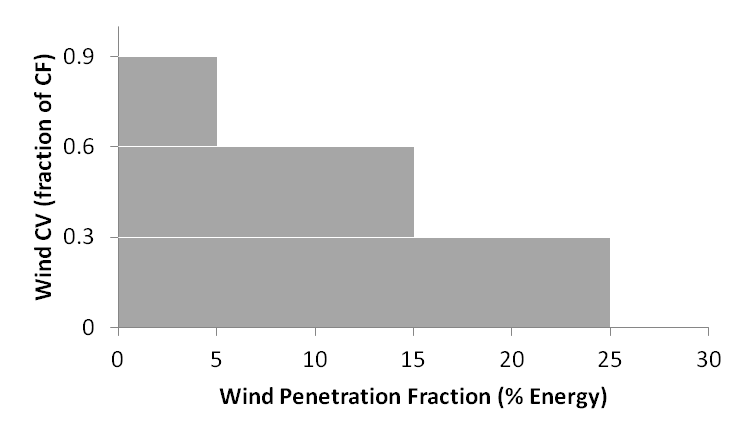 The capacity value bins are independent of the wind supply curve bins that already existed in MESSAGE, which are based on quality of the wind resource. That supply curve is defined by absolute wind built, not fraction of load; and the bins differ based on their annual average capacity factor, not capacity value. Solar PV is treated in a similar way as wind with the parameters obviously being different ones. In contrast, concentrating solar power (CSP) is modeled very much like dispatchable power plants in MESSAGE, because it is assumed to come with several hours of thermal storage, making it almost capable of running in baseload mode.

To ensure adequate flexibility in dispatch, we designed, for MESSAGE, a dynamic shadow price on capacity investments, in particular for wind---dynamic with respect to the amount of wind installed, the relative flexibility of the conventional power supply, and demand-side reliability requirements. For instance, a large amount of storage capacity should, all else being equal, lower the shadow price for additional wind. Conversely, an inflexible, coal- or nuclear-heavy generating base should increase the cost of investment in wind by demanding additional expenditures in the form of natural gas or storage or improved demand-side management to maintain system reliability.

Starting from the energy metric used in MESSAGE (electricity is considered as annual average load; there are no time-slices or load-curves), the flexibility requirement uses MWh of generation as its unit of note. The metric is inherently limited because operating reserves are often characterized by energy not-generated: a natural gas combustion turbine (gas-CT) that is standing by, ready to start-up at a moment’s notice; a combined-cycle plant operating below its peak output to enable ramping in the event of a surge in demand. Nevertheless, because there is generally a portion of generation associated with providing operating reserves (e.g. that on-call gas-CT plant will be called some fraction of the time), we posit that using generated energy to gauge flexibility is a reasonable metric considering the simplifications that need to be made. Furthermore, ancillary services associated with ramping and peaking often do involve real energy generation, and variable renewable technologies generally increase the need for ramping.

Electric-sector flexibility in MESSAGE is represented as follows: each generating technology is assigned a coefficient between -1 and 1 representing (if positive) the fraction of generation from that technology that is considered to be flexible or (if negative) the additional flexible generation required for each unit of generation from that technology. Load also has a parameter (a negative one) representing the amount of flexible energy the system requires solely to meet changes and uncertainty in load. The table below displays the parameters that resulted from the unit-commitment scenarios. Technologies that were not included in the unit-commitment model (nuclear, H2 electrolysis, solar PV) have estimated coefficients.