This page contains general information relevant to the entire questionnaire entry process. The topics discussed on this page are listed above.

The use of ellipsis in metadata archiving is varied but generally consistent. It involves the use of three dots to fill in a space or connect two parts of a question; the practice is to always add only three dots, regardless of the size of the space shown in the questionnaire. The following are examples of the different ways ellipsis is used in questionnaires and how they are entered into Archivist.

Sometimes a question contains ellipsis somewhere in between the question text; therefore creating a break in continuous text. This ellipsis needs to be entered into Archivist to show the intended location for the response domain attached to the question item (Example 1).

Note: Not all sequences of dots are entered into Archivist. For example, some questionnaires have dots between categories and their code values. This is generally done for the purpose of linking categories with their relevant code values due to a large space between them.

If, however, the ellipsis at the end of the question text is enclosed within brackets then it is entered into Archivist (Example 3).

This is also true for Question grids which sometimes have ellipsis within the code list(s) and/or questions. Example 5 below shows a question where the sub-questions on the y-axis include the ellipsis used in the questionnaire:

Date masks are often used in questionnaires but are left out from Archivist, as shown in Example 6 below:

Office Use Only Text

Sometimes additional punctuation or signs need to be entered into Archivist. As shown in Example 8 below, where the long line in between 'since then' and 'since you left school' has been entered using a forward slash to reflect the choice between the two sentence options.

There are occasions when questions include punctuation or signs which are not entered into Archivist. For example, in older questionnaires it not unusual to find hyphens where there is a word break due to formatting. In these cases we ignore the hyphen and exclude it from Archivist (Example 9).

There are some characters used in questionnaires which when being entered into Archivist, require a specific code known as ASCII characters. For example, the pound sign '£' needs to be entered as &#163. Another example of this is when entering the degree symbol for which the ASCII code is &#176. The only codes needed for Archivist entry are those that are over 127, some of which are provided below:

Sometimes a larger questionnaire may contain a contents page (see Example 10 below). However, since we do not document page numbers, and the headings will be included (most likely as sequences) elsewhere in the questionnaire, there is no benefit of including these in the metadata, therefore they can be excluded from the documentation.

Example 10 Questionnaire: ALSPAC Focusing on You 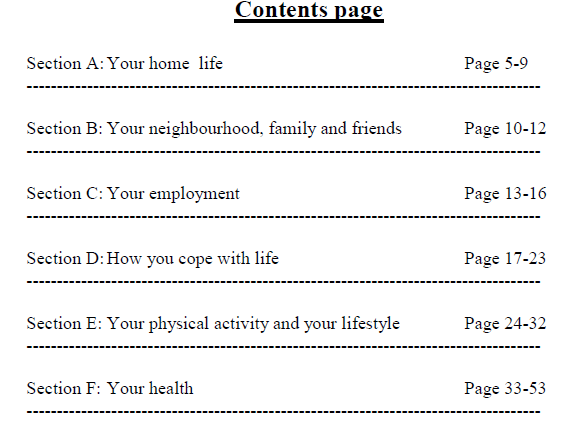