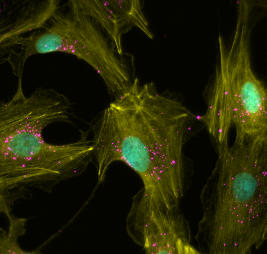 Most microscopes are widefield microscopes. In widefield microscopy the entire field is simultaneously illuminated throughout its full width and depth with the depth of field of the objective lens determining how much of the specimen appears in focus. Imaging and processing of single planes can be quick and easy because an entire field can be captured at once in a single camera image. Widefield is most suitable for 2D imaging of relatively thin specimens because all the depth information is in a single image so only a handful of images needs to be processed. It is generally not as useful for acquiring 3D data over a greater depth because light from out of the plane of focus can be seen as blur in the focal plane.

The LMCB widefield microscopes are listed below: