The zeroth law and temperature

Consider an experiment involving three systems S1, S­2 and S3. Suppose we bring S3 into contact with S1 until they reach thermal equilibrium. 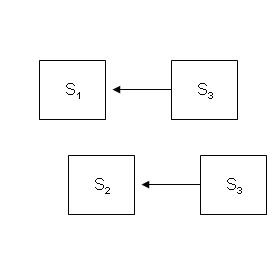 No work interactions assumed!
Now if we bring S3 into contact with S2 and as a result observable changes occur in S3¸ then we can conclude that the temperatures of S1 and S2 are unequal. To measure this inequality we use a thermometer.
For thermometer, we can use any property that changes with temperature. For example, if we chose a glass tube containing mercury as system S3, then we would have a mercury in glass thermometer. The mercury in glass thermometer is usually calibrated between two fixed points- one at the melting point of ice and the other at the boiling point of water- both at the pressure of one atmosphere.

Temperature scales are then defined by assigning numbers to the ice point and steam point and to the equally-spaced points between them.

Thermodynamics   Back to top