The term psychological refractory period (PRP) refers to the period of time during which the response to a second stimuli is significantly slowed because a first stimulus is still being processed. PRP is a product of the psychological refractory period paradigm, a paradigm in which two different stimuli are presented in rapid succession, each requiring a fast response. If the time between the first stimulus and the second is made shorter, the time to respond will be longer.
This PRP effect is generally taken as evidence for central bottleneck when initiating responses to stimuli. The bottleneck mechanism occurs when the first stimulus is being processed; any other stimuli cannot be processed. 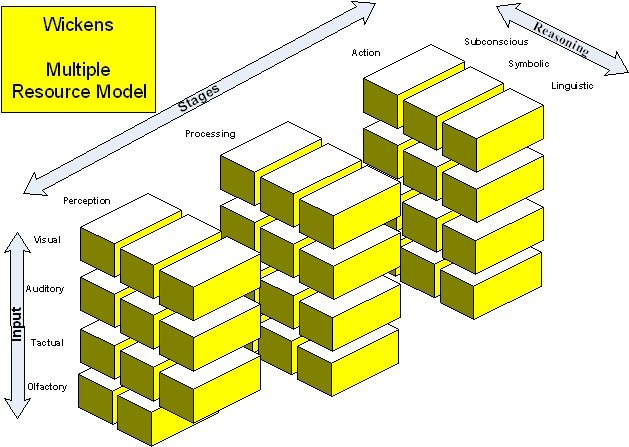 There are 4 dimensions used in the model (as shown in fig 1): stages, processing codes, input and visual channels.

In the MRT, dual-task interference can be affected depending on whether multiple tasks require cognitive/perceptual activities or response activities.

These activities represent stages of the model and are seen as a dichotomy in the sense that dual tasks requiring the same stages are prone to greater interference then in dual tasks where one task requires a cognitive activity and the other a response.

In figure 2, Perceptual and cognitive activities share the same resources and are functionally separate to the processes used to select and execute a response.

Evidence for the stages come from Shallice et als 1985 study on dual-task performance where they found that speech and motor activity (responses) are often controlled in the frontal regions of the brain (in particular, the central sulcus) while perceptual and language comprehension tend to be undertaken in the posterior section of the central sulcus. This indicates that the stage dichotomy can be associated with different brain structures.

Wickens (2002) uses a concrete example to represent this: “the added requirement for an air traffic controller to acknowledge vocally or manually each change in aircraft state (a response demand) would not disrupt his or her ability to maintain an accurate mental picture of the airspace (a perceptual-cognitive demand).”

Wickens also postulates that the stages predict that interference is likely to be great between resource-demanding perceptual tasks and cognitive tasks involving working memory to store or transform information. Despite using different information processes, they are supported by common resources. An example of this can be seen in performing dual tasks such as visually searching while mentally rotating an object or understanding speech while rehearsing a speech.

The model further postulates that these resources are separate and distinct across the 3 stages of perception, cognition and responses.

This allows the model to predict when it may or may not be useful to employ voice vs manual control.

In the MRT, Wickens talks about perceptual modalities which are visual (V), audio (A), tactile and olfactory modalities used in time sharing tasks. In particular, there is a dichotomy between tasks that utilise separate modalities or tasks that require one modality. These are referred to as cross-modal time sharing (e.g. AV) or intra-modalities (e.g. AA or VV).

The model predicts that there will generally be less interference when using cross-modalities rather than intra-modalities as a result of separate perceptual resources being used at the same time. Wickens however, is uncertain of whether this is really the case and points out that the advantage of cross-modal time-sharing may instead be as a result of peripheral factors on intra-modal conditions causing confusion or masking. For example, tasks that require two competing visual channels-if far apart- require visual scanning between them, if the tasks uses visual channels that are closer to one another, they may cause confusion and masking. The same is true of dual tasks requiring listen to two messages simultaneously.

There is research that has found that non-resource factors may contribute to intra-modal advantage such as the process of attention (I.e. knowing what to look for in two tasks) or ‘pre-emptive’ characteristics of auditory information . (Wickens and Liu 1988). Regardless, it can be inferred from the MRT that dual-task interference can generally be reduced by having tasks that uses one visual modality and one auditory modality. However, there are exceptions to this in cases where two displays may be more practical than one display and one auditory.

The MRT proposes that there are two visual channels used in visual processing. Focal and ambient. These are said to use separate resources which are characterised by a) the location within the brain where processing occurs and the type of processing that is undertaken.

The model infers that dual tasks involving one focal and one ambient processing will result in little interference.

Ambient vision involves use of peripheral vision and is used for sensing one’s orientation and motion in the environment.

The theory allows us to predict behaviour in multitasking activities e.g. reading and map and talking on the phone while driving. It is particularly useful for predicting dual-task interference compared with earlier cognitive ‘filtering’ models, e.g. Broadbent 1958.

3. Why do people multitask?

People are always contents doing multiple things at the same time. For example, some people like to listen to the radio while driving. This seems to be a simplest definition of “multitasking”. Generally, people define “multitasking” as “doing two or more things at the same time”. In order to detail its definition, multitasking is defined to describe the activity of performing multiple tasks during a specified time period. And there are some time spent switching between tasks to involve the necessary information (Dzubak). There is also another definition by Delbridge (2001) from different perspective. He defined it as accomplishing multiple goals in a specified time period with the task switches. Based on all of the definitions above, there is one main feature can be summarized: “task switches between the multitasking in a specified time period”.

As another example “people chew gum while walking” by Pashler (1994), it indicated that the multitasking is also related to the attentions needed for each task. In this example, people concentrate on walking and pay little attention to gum.

Multitasking can make our lives more diversity. With it, people can experience multi-types of activities in a specified time period and feel more enjoyable.

Besides it, the diversity brought from multitasking can also prevent boredom and also keep people thinking more creatively. Just imagine that “one person keep doing one thing for one hour”, it may be quite easy for him/her to get bored.

There is a controversy about whether multitasking can increase efficiency. Inspired from the experiment by Caruana (1997) about “multitasking learning of multiple related tasks”, I think the efficiency of multitasking depends on the relationship between these tasks to some extents. (experiment is needed for proving this).

i.      Employers think they need people who can multitask

iv.      We are convinced that the bad rap on multitasking is a hoax perpetrated by oldsters, who just don’t get it.

Dzubak, C. and State, P. Multitasking: The good, the bad, and the unknown

4. The costs of switching tasks

In many settings we must make strategic decisions about how to allocate limited resources.

Payoff function performance is predicted by the theory that people will select the strategy that maximizes payoff. Performance is an adaptation to multiple architectural constraints that include at least noise (task interference) and motor process interference.

Miyata & Norman (1986) hypothesized that people will be more likely to switch at task boundaries.

Payne et al. eventually explain their data by assuming that people switch after subgoal (i.e., finding a word in a patch of mixed words) – related to foraging and maximising interleaving strategies while comparing two sets of mixed words (hard set and easy set).

Brumby, Salvucci & Howes (2009) found that people select strategies to meet a desired dual-task performance tradeoff objective, because the interleaving strategies that people can use when multitasking are limited by the cognitive resources available.

For example, in the context of dialing a number while driving, they found that drivers tend  to dial chunks of digits at a time, returning their attention to driving in between each chunk. Dialling three or four digits at a time is a particularly efficient strategy because any more interleaving incurs additional time costs without significant improvement in lane keeping, and any less interleaving sacrifices safety. 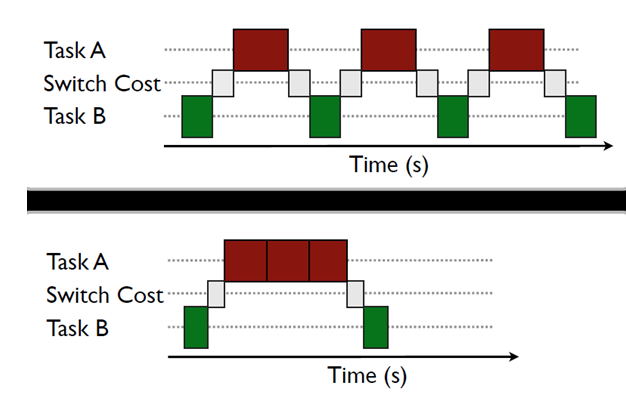 But how might people decide how to interleave tasks in situations where there are no representational structures or natural cues to guide this decision?

One possibility for how people might adapt their dual-task strategy to meet a specific task objective is that they monitor the amount of time that has elapsed since they last checked on the more important task (Kushleyeva, Salvucci, and Lee, 2005). For example, a safer driver would set a lower threshold for the time they would look away from the road, and therefore, will interleave between tasks more frequently.

Another possibility is that people select strategies to meet a desired dual-task performance tradeoff objective. Brumby et al (2010) used a dual-task paradigm to demonstrate that people can strategically allocate attention in multitask settings to meet specific performance criteria.  The benefit of this paradigm, over the classic dialing-while-driving paradigm, is that it does not have an external representational structure, such as the chunked number natural breakpoints, that can be used to guide decisions about when to interleave. Thus, participants are free to interleave the tasks how they like.

Results showed that participants met the required task objective by varying the number and duration of visits to the navigation panel, and by also varying the amount of time given up to steering control between visits. These findings support the idea that people can strategically allocate attention in multitask settings. 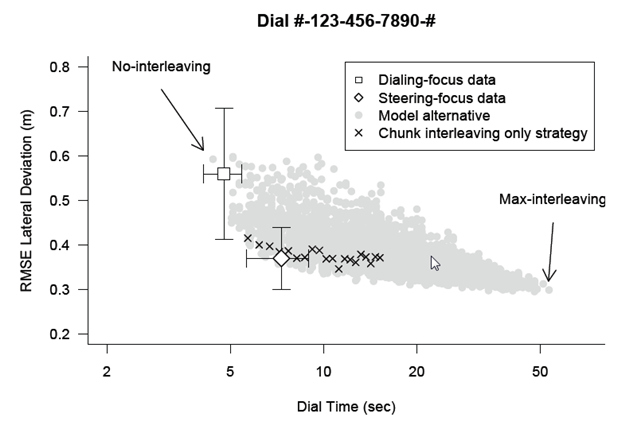 6. Application to systems: how can we mitigate problems associated with mobile devices used on the move?(Daniel Fozzati, Katrine Sannaes)

Horrey and Lesch (2009): driver-initiated Distractions
Tets track experiment – while driving, even given the change to do secondary in-car task on less demanding parts of the track, people would still be inclined to do them at other points. This means that people will feel compelled to pick up the phone when it starts ringing, no matter how demanding the road they are in is.

A design solution?
Offer a combination of output moadalities. Audio is less distracting but can be slow in how quickly the information is received. Example: incoming text messages are output as audio.

Brumby, D.P., Davies, S.C.E., Janssen, C.P., & Grace, J.J. (2011). Fast or safe? How performance objectives determine modality output choices while interacting on the move. In CHI 2011.
Given that many studies have proved that using audio is safer than traditional GUI interfaces while multitasking (driving in this case), they try to see whether drivers might sacrifice security for speed (of the output modality). Since audio is generally slower in providing the information required, drivers might want to quickly glance at the screen instead. Using their terminology, the experiment is designed to find whether “performance objectives have a strong influence on modality choices with multimodal devices”. Performance being not just the characteristics of the output modality (audio slower, visual quicker) but also of the  task objectives (if the driver’s priority is to access the information quickly or not).
What they found is that completion time of the task is a critical aspect when designing audio interfaces. There is a safety/speed tradeoff to consider when designing multimodal interfaces. If for example, the user priority is to access the information, he/she will sacrifice safety and choose to use the visual modality as it is quicker.

Other exam questions that we've thought of