In contrast to how a typical user would normally operate MAGICC, it has become common for the MESSAGE team to run the model stochastically in order to generate probabilistic estimates of climate system responses (e.g., temperature increase or atmospheric GHG concentrations), a methodology first described in Keppo et al. (2007). In short, a single set of emissions trajectories is run in MAGICC under 100 different sets of parameter assumptions. This allows one to explore the uncertainty in climate system responses for a single set of emissions trajectories (from the MESSAGE scenario output) by using a probability density function (PDF) to describe the following parameters: climate sensitivity, ocean diffusivity, and aerosol forcing. Therefore, instead of simply saying that, for a given mitigation scenario and emissions trajectory, "the projected maximum global temperature increase over the course of the twenty-first century is estimated at X ºC", one can say something like "the probability of staying below X ºC maximum global temperature increase is Y%."

The reason the projections of climate system responses are estimated probabilistically is because of the large amount of uncertainty in the three climate system parameters mentioned above. Perhaps the most important among these, and one of the most uncertain, is climate sensitivity, which refers to the equilibrium global average warming expected if CO2 concentrations were to be sustained at double their pre-industrial values. This value is estimated by the IPCC AR4 "as likely to be in the range 2 to 4.5 ºC with a best estimate of about 3 ºC" (IPCC 2007). Contributing to the IPCC AR4 were a number of studies that estimate PDFs for climate sensitivity (see Meinshausen et al. (2009) and O'Neill et al. (2010) for good reviews). And as Figure 1 illustrates, the shape of these PDFs can be quite different. A typical probabilistic application of the joint MESSAGE-MAGICC set-up involves dividing each of these PDFs into 100 steps between 0.1 and 10 ºC. PDFs for ocean diffusivity and aerosol forcing – two other important, though uncertain, climate parameters – are also generated by correlating them with climate sensitivity at each step (Meinshausen 2006). The Forest et al. (2002) distribution with uniform priors (bold line in figure) is often chosen because it is near the middle of the range found in the literature: a climate sensitivity value of 3 ºC has a (cumulative) likelihood of 53.9% using the PDF from Forest et al. (2002). 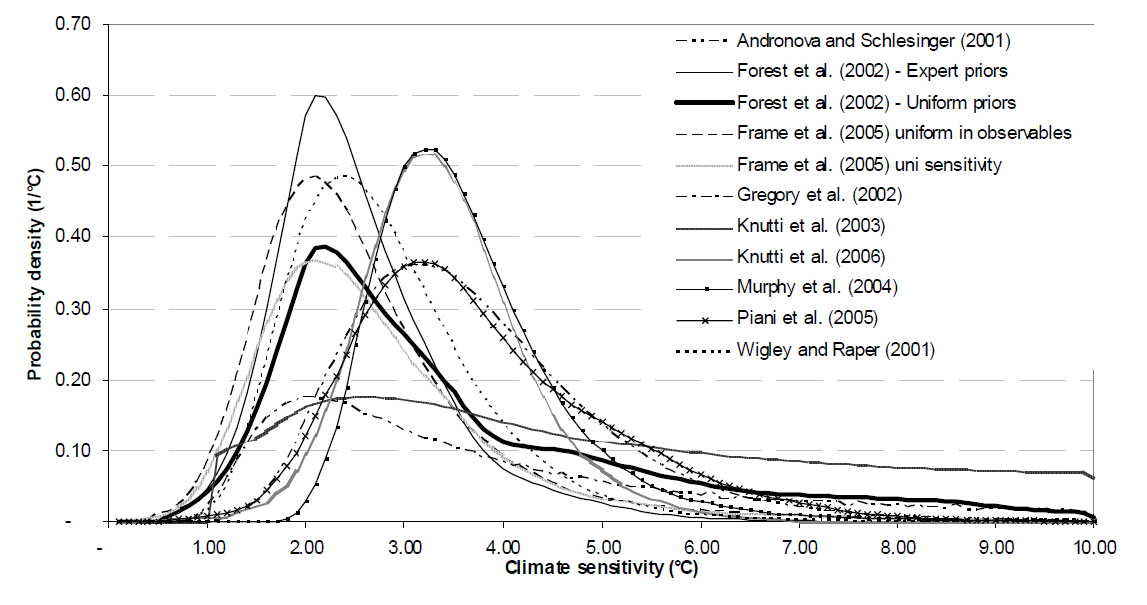