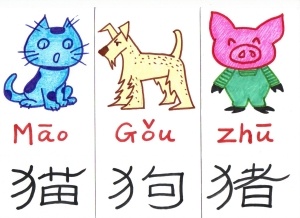 The left part of this is another form of 犬 quǎn 'dog'. The leaves on the right are the animals ears and the field is a sketch of its face. The traditional character has a couple of extra strokes: 貓. The sound is very close to miaow!

This is formed of 犬 quǎn 'dog' (but not as commonly used as 狗) plus the phonetic from 句 jù 'sentence'. Again, gǒu is rather plausible as a growl.

The traditional character has a few more strokes: 豬 In fact they are the same as the bottom part of 家 'house' (i.e. pig under a roof!). The phonetic 者 is pronounced zhě on its own and is a suffix meaning 'one who does whatever the verb to which it is attached indicates'.

Xiǎo 'small' is useful with animals:

Think of xiǎo as being three small dots.