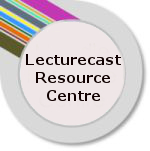 Aside from their uses as an aid to viewers with auditory impairment, transcripts and captions can be extremely useful as a study tool.  Students often search large amounts of text using keywords to pinpoint passages of interest; Lecturecast transcripts, which are searchable and synchronised with the recording, allow similar searches of video presentations.

ASR was enabled on the Lecturecast system 10 August 2020, so transcripts  will automatically be created for any recordings  uploaded to the system and be available to viewers automatically once a recording's audio file has been processed.

There are no additional steps you need to take.  When a recording is published (either automatically if using the Lecturecast Scheduler with a UCL teaching space or manually via Universal Capture) the transcript is automatically be generated.  This will take longer to process than the video, but usually no more than two hours and often sooner.  Once this is completed, you'll see the Transcript Icon (1) along the top ribbon.  This allows the Viewer to have the transcript Visible or Hidden.  The full transcript is shown in the right window, with the current speech highlighted.  The Download Icon (2) allows the viewer to save a copy of the transcript as a .vvt file.  The Search function (3) will look for matches, with < and > to move back and forward through the results.

To generate transcripts for recordings which were published to a section prior to ASR activation, you simply need to make a small edit (this can be as short as clipping a second from the beginning or end of your recording). This action will force a reprocessing of the recording which will create a transcript.  Again, the transcript will take a little longer than the video.  If you are re-publishing content from a previous year to a 20/21 class, this will automatically create a transcript for the 20/21 version.

Depending on the accuracy of ASR for a particular recording, the additional work required in providing an accurate transcript can vary greatly. The most significant factors affecting ASR accuracy are the technical quality of recording (which is largely due to the quality of mic or headset) and the amount of subject-specific vocabulary used. Staff are under no obligation to correct transcripts (This doesn't include situations where transcript provision has been agreed through SORAs).

If you do wish to make amendments, please refer to the Echo360 guides on accessing and using the transcript editor, for step by step guidance.

Lecturecast has two methods by which users with the student role may be given transcript editing rights.

1) By using the appropriate Lecturecast section feature switch that gives any student enrolled on the section transcript editing rights. Recordings have to be published to a section for this method to work. See these instructions for turning section features on and off.

2) Recordings from a member of staff's Lecturecast library (home content area) may be shared with student(s). This must be done on an individual basis for each recording, one or more students may be selected - this method is more granular than method 1, in that only named students may edit transcripts.

How to opt out

Staff not wishing to have a transcript associated with their recording(s) can now opt out by deleting a recording's transcript file(s). Please see the Echo360 deleting transcripts guidance showing how to do this. Note the previous method of uploading a blank transcript is no longer necessary.

By default, the transcript is shown in a new panel on the right, with the current speech highlighted in yellow.  Close Captions (which are overlaid on the video like subtitles) use the same text as the transcript but are not available to viewers until the transcript text has been 'applied' to the caption system.  This needs to be done individually for each recording, as detailed on the Echo360 guide for applying Closed Captions (CC)