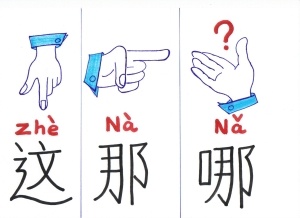 It is often followed by a measure word such as 个 ge:
这个是苹果；那个是香蕉；哪个是橘子？

When it has an abstract meaning, it may be used on its own as a noun, as with 'this' in English:
这是我爸爸；那是我妈妈；哪位是王老师？
Zhè shi wǒ bàba; nà shi wǒ māma; nà wèi shi Wáng lǎoshī? 'This is my father; this is my mother; which person is teacher Wang?
Note that the measure word 位 wèi is used instead of 人 rén to indicate respect to him/her as a teacher.