Type in the simple program below, which reads in the components of two vectors and then calculates the sum of the vectors. Call your program vector1.f90. Use some trial values to check that the program sums the vectors correctly. 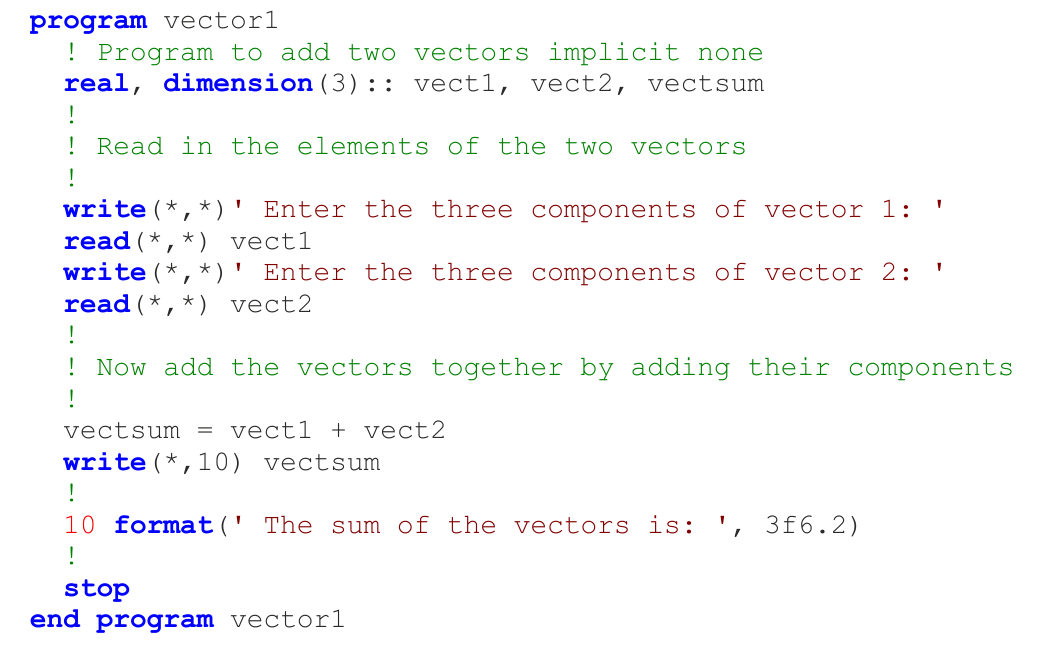 The length of a vector r is given by

Imagine that your department has asked you to write a program that records students' exam marks. Every student who scores more than 50% has passed the exam. You will need to use arrays to record the students' names, their marks and whether they have passed. The department has also asked that you calculate the total number who have passed, the average mark, and identify the person with the top mark. Write a prototype program called results1.f90 which processes results for 5 students and produces output similar to the following:

If you have a program with many arrays, it can be difficult to remember why particular arrays have particular sizes. One way round this is to use parameters in your array declarations, as illustrated below:

Values for variables can also be set in the declaration statements.
However, because the values of variables can be changed during operation of the program, these will be initial values only. The example above could have initialised the three arrays as follows:

Edit your program results1.f90 so that the number of students in the class is described as a parameter.

Type the following program into a file called roots1.f90 and then try running it with trial values of n.

This program reads in an integer (n) and then writes out the first n even numbers, together with their square roots. The do loop starts with the loop index i set to 2, then executes all statements down to the end do statement. In the first pass through the loop, the numbers are displayed on the screen. At the beginning of the second pass i is are incremented by 2 and takes the value 4. As long as i is not greater than 2*n, the statements will be executed again and the numbers 4 and 2 will be displayed on the screen. The loop will continue until the last numbers are displayed

Alter the program roots1.f90 so that it displays the results in reverse order. Name the altered program roots2.f90.

Previously you wrote a program results1.f90, which recorded the exam marks of 5 students. The head of department is so pleased with your program that he would like a version that can handle large classes. Unfortunately, your original output layout is not suitable for larger numbers of students. Modify your program so that it uses a do loop to display the arrays in a vertical layout rather than a horizontal one, e.g:

Test the program by entering marks for a larger number of students.

Hint: you may not know how many students are in a class. To make sure that your arrays are big enough to handle a whole class, either use allocatable arrays or declare the arrays with the maximum dimensions that you think they could need.